The national cuisine, an integral part of the culture of any ethnic group, is forming for centuries under the influence of the nature of the area and living conditions. It is believed that mountaineers live longer not only due to favourable environmental conditions but also a healthier natural diet.

In this article, we will show you the best dishes of Hutsuls – an ethnic group in the Carpathian mountains.

You can try Hutsul dishes on our tours:

The basic diet of Hutsuls consists of cereals (corn, barley, oats), vegetables (potatoes, cabbage, beetroot), legumes (peas, beans), and dairy products. The daily bread in the mountains for a long time was bread (burishnik) usually made of cornflour, often with the addition of boiled potatoes to the bread dough. In the modern diet, the preparation of such bread has decreased.

You may also be interested in tours to Bukovel.

For a long time, Hutsul cuisine was characterized by limited meat consumption, and today guests of the region will be offered mouthwatering jellies and juicy Hutsul pork, fragrant home-made sausage with cracklings and roast, as well as incredibly tasty meatballs. By the way, according to ethnographers, jelly or roast meat, as well as beetroot borscht, cabbage rolls and corn or rice porridge formed the basis of the ceremonial menu for baptisms, weddings and funerals. Hutsul cuisine is also characterized by the generous use of spices.

During fasting, vegetables, legumes, roasted mushrooms and fish were preferred, and hemp or flaxseed oil were used to soften the taste. Many traditional recipes that have been passed down from generation to generation have survived to this day, and Hutsuls treat their historical sources with great respect.

So, let’s take a look at the daily and festive pans and pots of Hutsuls, and try to recreate real Hutsul dishes in our own kitchens. Of course, the legendary Hutsul,bryndza is quite difficult to prepare at home, as well as another variety of Hutsul cheese “wurdu” from whey and sheep’s milk. A real banosh (banush) will not be as good on a gas stove, because it is traditionally cooked on the open fire, absorbing a dizzying smoky aroma. However, if you have the necessary ingredients, it’s totally possible to prepare some other dishes for a family dinner.

For our top list, we have chosen iconic dishes of Hutsul cuisine, as well as those that have such original names that they need to be deciphered for the average tourist. Let’s go together to the Carpathians!

1. Banush – a speciality of the Carpathian cuisine

The eldest of the region say that this simple, nutritious and truly symbolic dish for the Hutsul land originated when only sour cream and cornflour remained. And Banush got its name from the name of Mr Banosh, who was being fed abundantly by his caring wife. From ancient times, this dish that Hutsulare so proud of has been prepared exclusively by men, and at every respectable farmstead, there should be a place for the sacred ritual of the preparation of banush.

There are several tricks in cooking this meal. First, sour cream or cream should be freshly picked, and the dish should be stirred only in one direction during cooking and only with a wooden spoon. Hutsuls call the traditional Carpathian banush a perpetual motion machine because this high-calorie and nourishing dish fills you with energy enough for a long time.

You can taste this delicacy during our tour:

From ancient times, Hutsuls regularly ate another dish made of corn flour – golden kulesh. Its recipe is a bit simpler than that of the banush, because, as a rule, kulesha is prepared with water. Instead of sour cream, butter is added to the finished dish.

Thickened kulesha is cut into portions with thread and traditionally sprinkled with mashed bryndza. You can diversify and enrich the taste of kulesha with crispy cracknels (fried bits of salo), mushrooms stewed in sour cream, or fried onions. Kulesha sometimes serves as an alternative to bread for Hutsuls, and sour milk is especially suitable for its original taste.

Zaterka is a fairly simple vegetarian flour dish. Boiling water is slowly mixed with cornflour until forming a thick, homogeneous consistency. Sugar was added to zaterka to improve its taste.

This variety of Hutsul borscht is totally different from the borscht made in the rest of Ukraine. The main ingredients of borscht are white, feeding beetroot, sauerkraut, meat ribs and sour cream. Fragrant spices like thyme give the white borscht its incredible aroma.

Another fairly common soup, the main components of which are sauerkraut and cornflour. A more mouth-filling dish is obtained when cooked with boiled pork broth, in its absence, you can add lard or oil. Potatoes cooked in their skins are served separately and perfectly complement the original taste of the dish.

You can try Hutsul food on our tours:

The gifts of nature – a variety of forest mushrooms, that are plentiful in the mountains, have long been part of the traditional diet of Hutsuls. Therefore, mushroom soup is a very common first course of mountain dwellers. Why zupa? Mushroom soup received this name under the influence of the Polish language in the 20-30ies of last century.

Zupa is the most delicious when made from white mushrooms, however, you can use other types of mushrooms, such as chanterelles. In the absence of fresh mushrooms, dried ones can be added. Zupa also includes noodles, roasted garlic and onions, herbs and spices.

Small Hutsul stuffed cabbage is a real work of culinary art. They are prepared from sauerkraut. To soften the taste, the separated cabbage leaves are boiled and stuffed mainly with coarsely ground corn grain with the addition of salo or meat.

Also vegetarian, very old dish that resembles a modern kissel. The process of making kyselytsia is quite long – yeast and a little rye bread are added to the flour diluted in warm water. The result is left to rest for a day in a warm place, then it must be filtered and, adding water, cook until thickened. Fried onions enhance the taste of the dish.

Knysh is a farinaceous dish, resembling a cake in appearance, however, a traditional knish is not sweet at all. It’s made from corn flour, which is popular in Hutsul cuisine and is used to make a custard, elastic dough. Knysh is stuffed with grated cheese mixed with garlic and herbs, or potatoes or cabbage. A baked slice of salo will give a special appetizing look and taste to the dish.

We have combined in our rating these two interesting festive dishes because they have a common basis – beetroot. Beet salads with prunes, beans, nuts, and garlic are quite common in the Hutsul region. Tsvikli are a mixture of boiled beets with grated horseradish, which is served with meat dishes, and shukhy, in addition to sliced beets, contain wild mushrooms (mostly marinated honeysuckle), onions fried with flour, ground black pepper.

This healthy and nutritious sour milk product can be eaten alone or added to cereal or potato dishes. It is made from fresh milk in a clay or wooden bowl smeared with sour cream. Technological subtleties of cooking huslianka allow to avoid the formation of whey during the fermentation of milk. 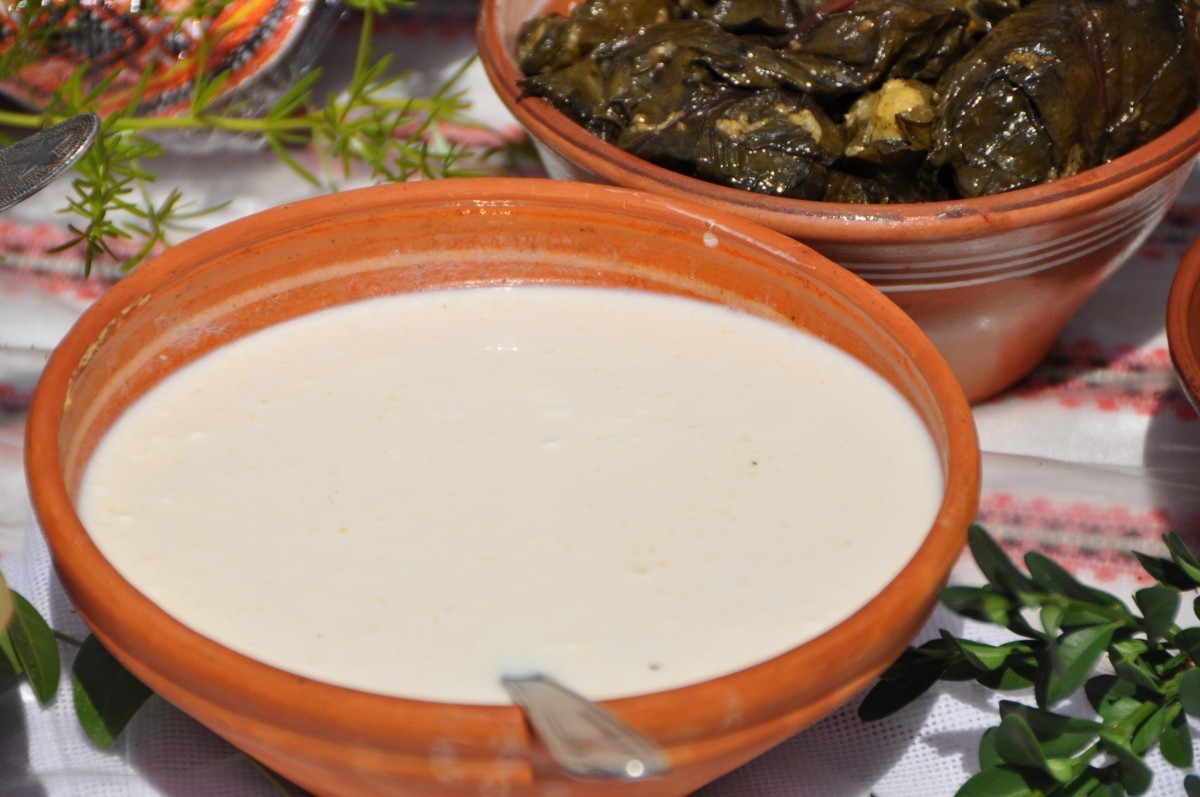 A real huslianka – thick and homogeneous, like sour cream, has a refreshing taste and stimulating properties. 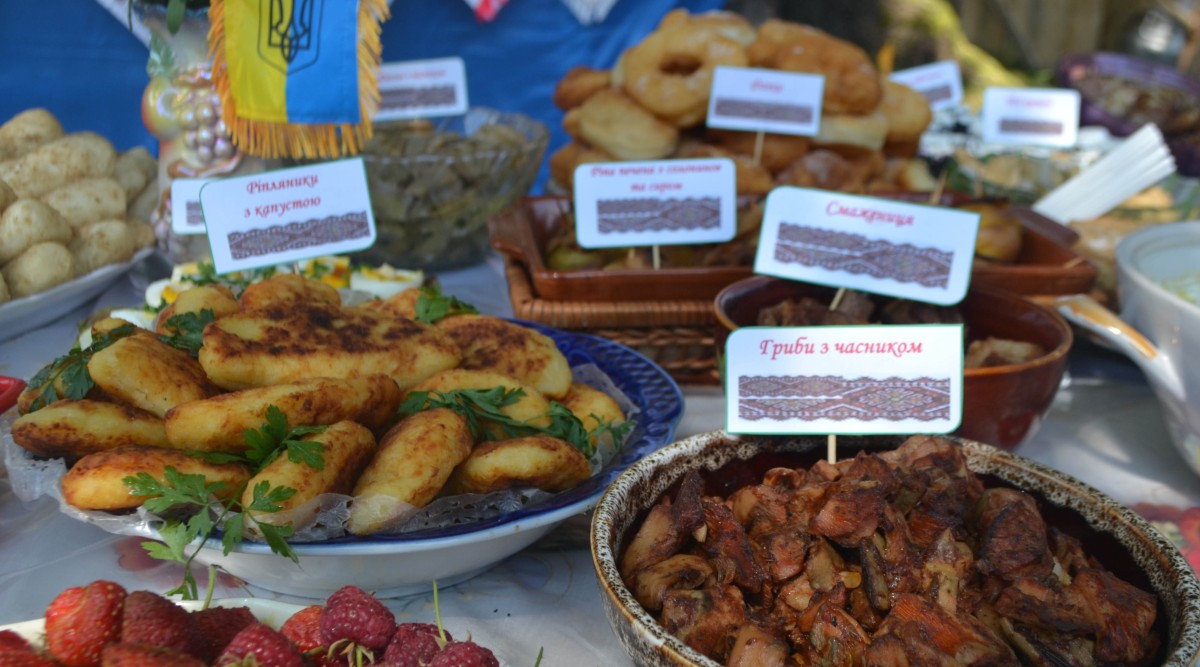 So, we invite you to the Hutsul table! As part of our most popular tours to the Carpathians, a place where you have a great opportunity to taste the Hutsul region at rousing Hutsul party. A rich festive table of authentic Hutsul dishes awaits you on tours: