Ukraine is a diverse country with many unique and interesting traditions. Different ethnic groups and religions enriched and enhanced our culture throughout the centuries.

Christianity was introduced in Kyivan Rus, the predecessor of Ukraine, in 988. Before that, our ancestors had been pagan. However, they didn’t discard pagan traditions entirely after changing their religion. It is because of this that now in many Ukrainian religious holidays, we can observe a peculiar combination of ancient pagan customs and Christian belief.

Ukrainians actually have two Christmases. One on December, 25, which is Catholic Christmas, and another one is on January, 7, which is Orthodox Christmas.

There are many traditions associated with Christmas, but the most important rituals that Ukrainians follow regularly are Christmas dinner and Christmas caroling.

The main dish at the festive table is kutia – a mix of boiled grains, honey, nuts, poppy seeds, dried fruits, and other toppings. This dish is usually eaten first. Other dishes present at the Christmas table might include mushrooms, fish, varenyky, potatoes, etc.

The next morning after Christmas Eve is Christmas day. On this day the fasting ends, and Ukrainians go to church and visit their relatives.

Another ancient custom is Christmas caroling or Koliada. During Koliada, children and young people visit neighbors, relatives, and friends singing traditional songs and giving the families best wishes. In return, hosts give Koliada participants presents such as sweets, fruit, or money. 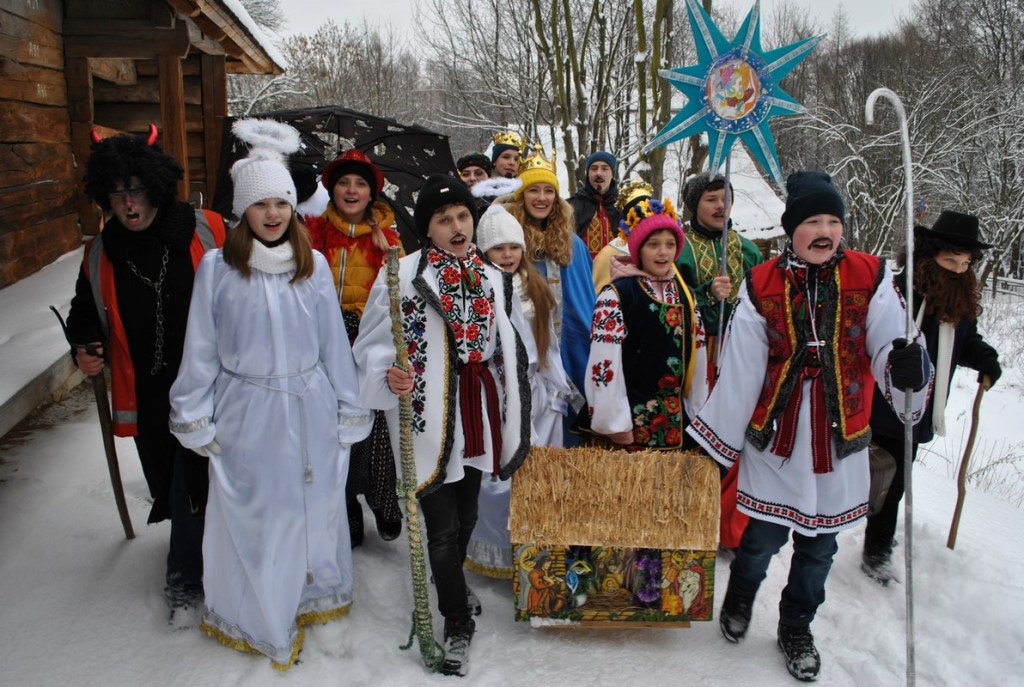 Koliada participants wear traditional clothes and costumes. They also carry a handcrafted star that symbolizes the star that had appeared when Crist was born.

Koliada begins on Christmas Eve and may last for several days. 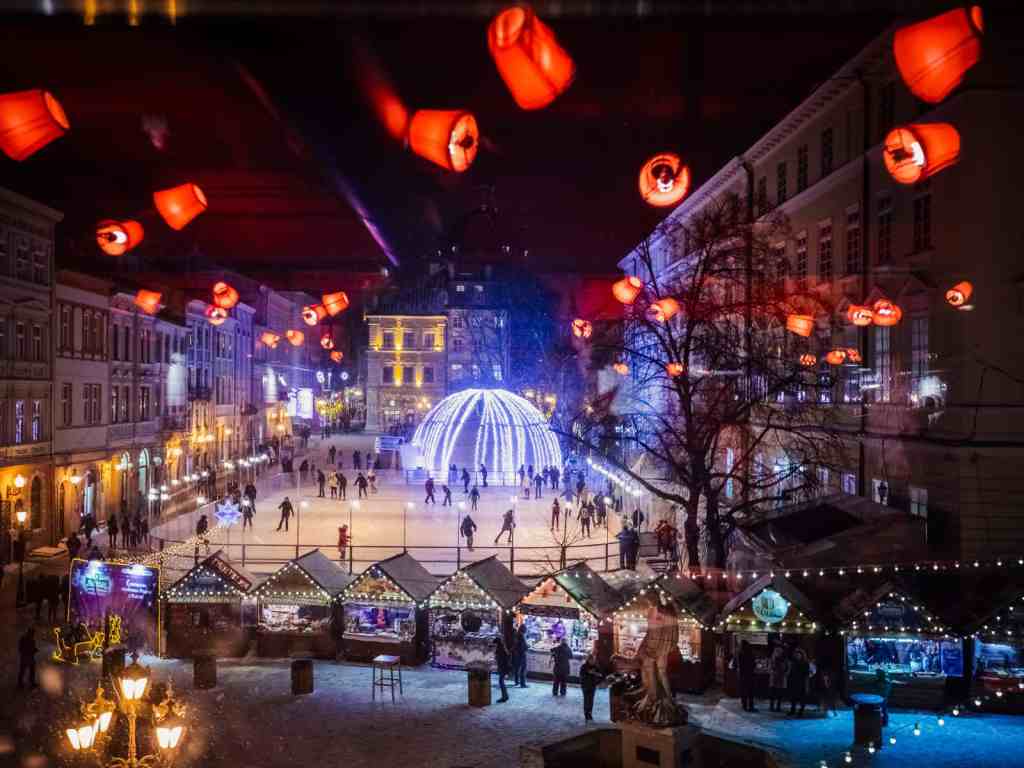 Celebrate Christmas with us on tours to Lviv and Carpathian mountains!

Malanka is an ancient holiday that combines Christian and pagan traditions. Ukrainians celebrate it yearly on the 13th of January. This holiday used to mark the beginning of the new year before the calendar was changed from Julian to Gregorian. 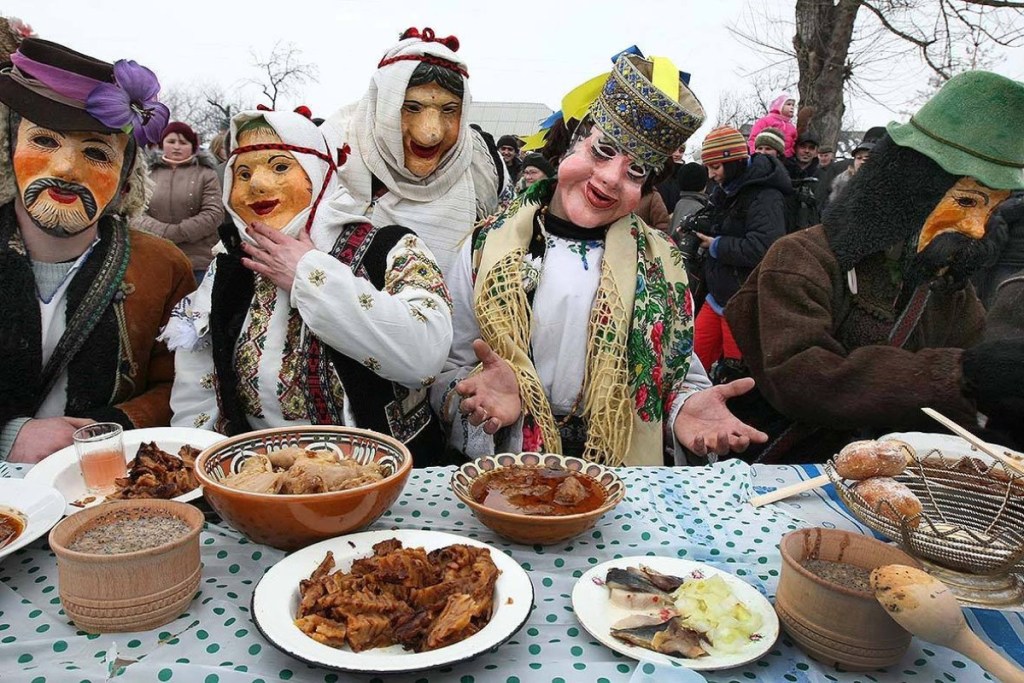 Traditional Malanka is a vivid and loud festival with quirky costumes, songs, and acting.

Typical characters of Malanka include grandpa and grandma, gypsies with wheat straw bears, kings and queens, horses, and doctors. Some costumes are extremely heavy and can weigh up to 100 kg!

If you want to see the traditional and epic celebration of Malanka, you should go to Western Ukraine. The biggest Malanka of Ukraine is organized in Krasnoilsk – a village near the Romanian border. 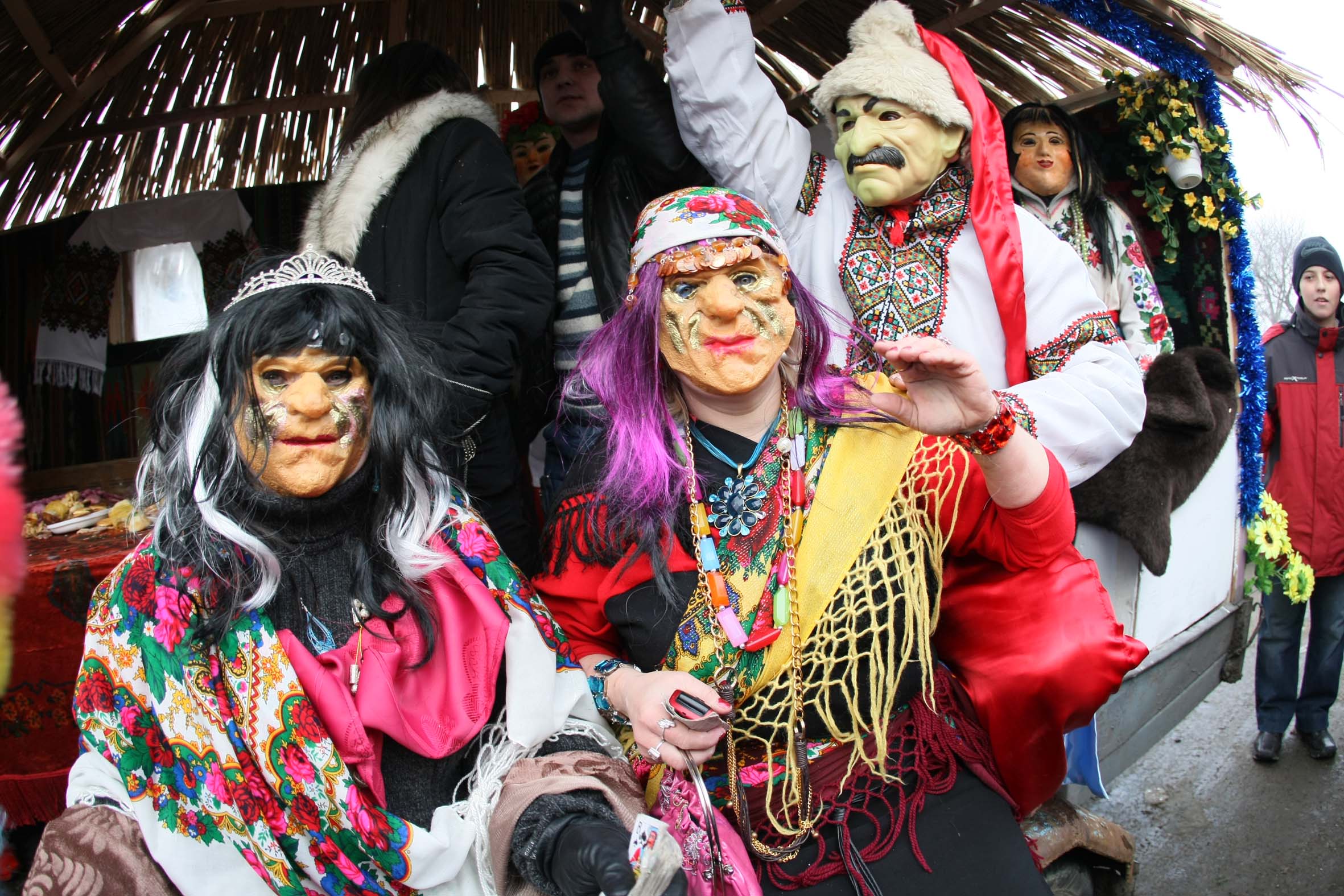 Malanka in the village of Vashkivtsi would be even more interesting for foreign tourists because here they can see many Ukrainian traditions. Highlights of this festival include a bear fight, swimming in a river for purification, and a procession of decorated cars and motorcycles. 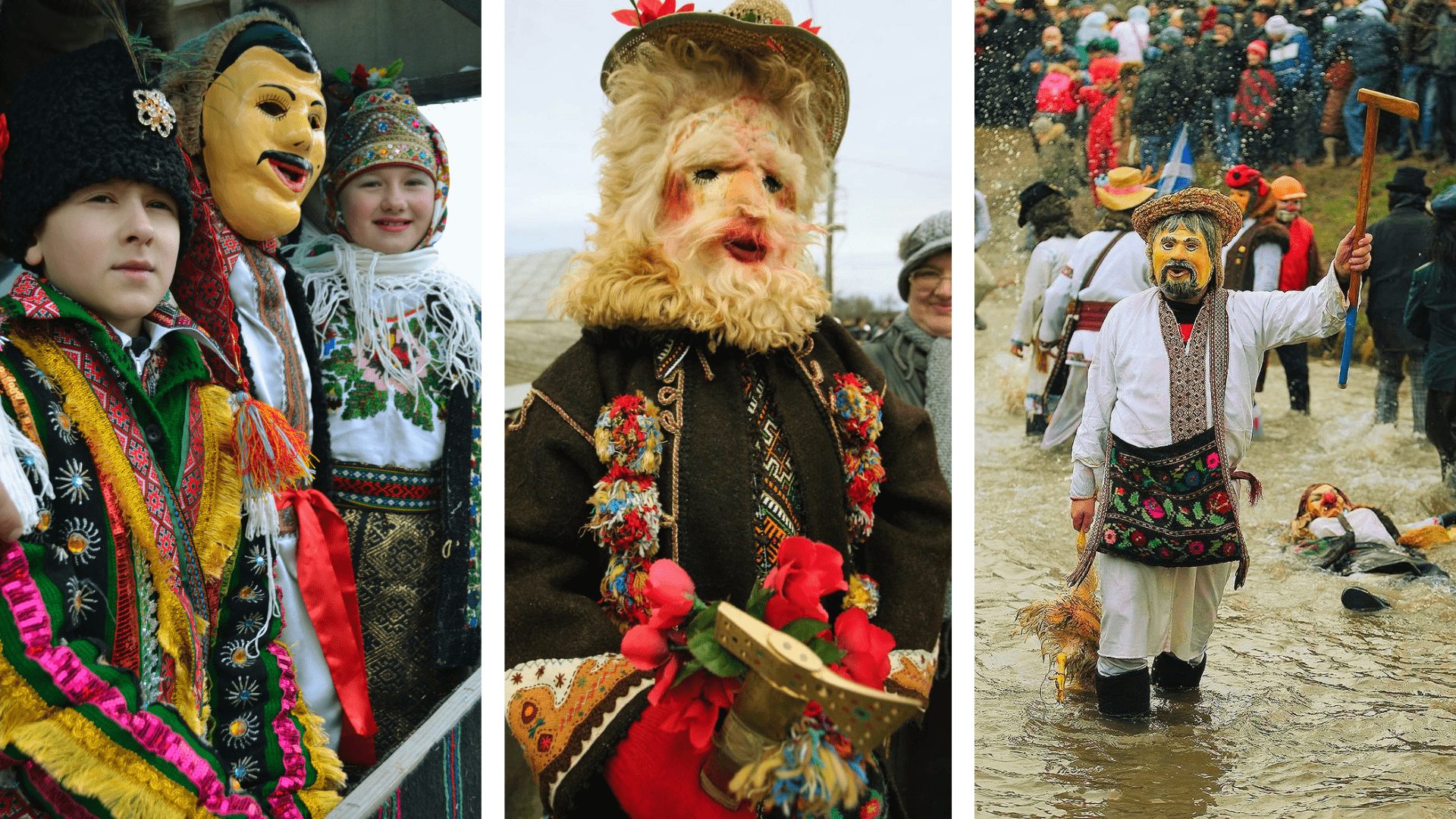 You can also see Malanka in Chernivtsi, at Malanka Fest, and in several villages of Western Ukraine: Beleluya, Ustia, Chahor, and Horoshova.

Experience Malanka on our tours:

Masnytsia is an ancient Eastern Slavic holiday that celebrates the end of winter and welcomes spring.

Masnytsia doesn’t have a designated date – it is usually celebrated in late February – early March, before the beginning of the Great Fast, the most important fasting season. The celebration lasts for one week.

Masnytsia has existed in Slavic cultures since pagan times. It is believed that this holiday was dedicated either to Jarilo, the god of the sun, or Veles, the god of livestock and welfare. 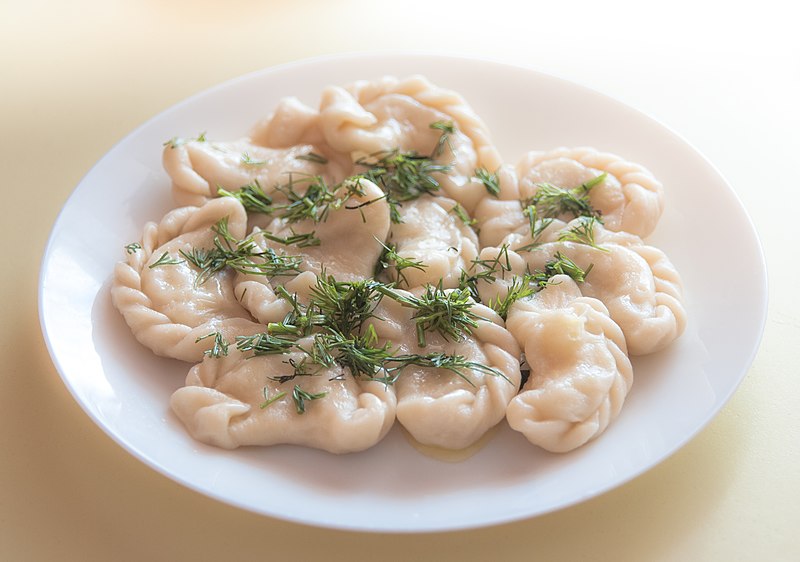 Ancient Ukrainians believed that the more fun they have on Masnytsia – the more successful and plentiful the following year will be. That’s why Masnytsia is a loud and cheerful holiday with a lot of music, songs, entertainment, and food.

For many Ukrainian Christians, Easter is the most important and happy holiday, and they begin preparing for it in advance.

Before Easter, there is a 7-week long fast that begins after Masnytsia. On Holy Thursday, the last Thursday before Christmas, Christians clean their house and themselves and start preparing eggs and paska – Ukrainian Easter bread. 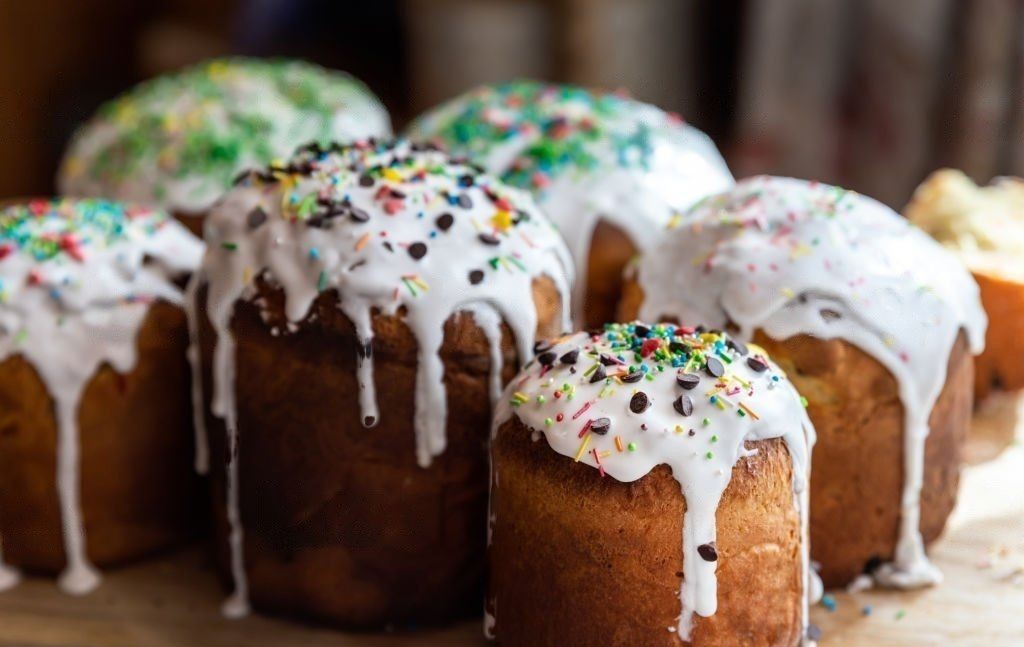 Families usually cook several paskas of different sizes. It is important to maintain quiet and peace in your home while paskas are baked. Modern paskas often contain additives like raisins or candied peel and also have decoration on top.

Another crucial element of Ukrainian Easter is pysanka – an egg decorated with folk ornaments. Traditional pysankas are painted with wax, and they are true works of art. Such professional pysankas are made by artists who have extensive knowledge of this ancient craft as well as of the symbols that are painted on eggs. You can learn to make your own pysanka at our Easter Egg Painting Workshop.

Before going to church on Easter, Ukrainians prepare a special Easter basket. In the basket, they put paska and Easter eggs, cheese, ham, and sausages. They also add a willow branch and an embroidered towel – rushnyk.

At the church, a priest blesses the food in the basket. After Ukrainians come home from church, they have breakfast together. Breakfast should begin with eggs and other blessed food, then the family can eat other dishes.

Participate in our Easter tours to celebrate Ukrainian Easter like a local:

Green Week is an ancient Slavic holiday with pagan roots. After Ukraine converted to Christianity, it started to be celebrated in connection with the Christian holiday Pentecost.

During Green Week, Ukrainians decorate their houses with plants and flowers that symbolize the revival of nature and the beginning of summer. At this time, people also honor their ancestors and visit their graves.

Ivana Kupala is a holiday that originated during pagan times and marks the summer solstice. It is celebrated on the night between 6 and 7th of July.

Ivana Kupala celebration is full of unusual and interesting customs resulting from the intertwinement of pagan and Christian traditions. Let’s find out what traditions Ukrainians have carried through the centuries and follow to this day:

You can join the locals in celebrating the holiday. In the Kyiv region, Ivana Kupala celebrations are organized in the open-air museum of Pyrohiv as well as in Park Kyiv Rus in the village of Kopachov, and in Lviv – in the Museum of Folk Architecture and Life.

Independence Day is the most important state holiday in Ukraine, and it is celebrated in all cities with concerts, festivals, competitions, and other events.

The capital city houses the most vivid celebrations. Military parade on central Khreshchatyk Street is traditional for this day, however, it is not held yearly. Every year, authorities decide how they want to celebrate Independence Day and whether there will be a military parade or not.

The yearly attraction of Independence Day is the flower exhibition. It is organized at Pechersk Landscape Park. At this festival, you can see interesting flower sculptures, purchase plants, flowers, souvenirs, and honey. Every year the exhibition is dedicated to a specific topic, and flower compositions reflect this topic.

As the cultural capital of Ukraine, Lviv celebrates Independence Day with numerous cultural events. Locals put on traditional clothes and visit Ukrainian music concerts, festivals, and fairs. There is a big celebration organized in the Museum of Folk Architecture and Life, and other interesting events like movie festivals, Lviv Ice Cream Market, and food markets.

Diving into icy-cold water to celebrate Baptism of Jesus, January 19

Ukrainians and some other Slavic nations celebrate the Baptism of Jesus with an unusual and courageous act – they dive into icy cold waters in the middle of winter. They do it in specially designated places that were blessed by a priest.

Weather conditions do not bother courageous people. If the air temperature is below zero and the lake or pond freezes, they make ice holes to make diving possible.

People who do it say that this activity not only purifies their souls but also benefits their health and makes them stronger.

Saint Andrew’s Day is an unusual holiday because on this day girls tell their fortunes while boys make mischief and play pranks on their neighbors or friends.

Such pranks should be peaceful and boys usually ensure that they do not vandalize somebody’s property.

Mischief tradition is most popular in villages, and the village environment provides for many prank options. Boys can remove gates or doors and carry them to another part of the village, displace chaff cutter, and other items.

Masters of prank art will form groups to steal someone’s wagon and place it on a house roof or a public transport station. To this day while opening local news websites after St Andrew’s Day, we can encounter photos of wagons standing on the roofs of bus stops.

This tradition is widespread in Western Ukraine as well as Poland, Czech Republic, and other Roman Catholic communities. In Ukraine it is called oblyvanyi ponedilok – ‘pour-over Monday’, while in Central European countries it is known as Śmigus-dyngus.

Śmigus-dyngus is celebrated on Monday, the next day after Easter.

Traditionally, during this holiday boys pour water over unmarried girls, and girls in exchange give them Easter eggs. Our ancestors also used to dip into the water themselves and throw water over their livestock and valuable items. It was believed that this custom brings success, wealth, beauty, and purification.

In modern times, Lviv residents love this tradition the most. In Lviv, it is considered normal to throw water at random passersby during Wet Monday. Every year, locals participate in a celebration of this holiday at Rynok Square. The city administration organizes special zones for water fights with a continuous water supply.

Participate in our Easter in Lviv + Carpathian mountains tour to experience this event.

So if someone suddenly pours water over you in Ukraine – don’t get mad. Check the calendar, maybe it’s Śmigus-dyngus today. You are actually lucky – gushing success, happiness and welfare await you!

We are Tour Operator Vidviday – a local travel company based in Lviv, Ukraine. Our goal is to let foreigners learn more about our country and its traditions while enjoying their vacation. We have more than 300 tours and excursions to the most interesting locations in Ukraine. In 2020, Ukraine Tourism Awards recognized us as the best tour operator in Ukraine.

We would be happy to see you on our tours!