Regions of Ukraine are abundant with charming romantic places that attract attention with their natural beauty and originality. But one of the most popular and amazing places is the Tunnel of Love near the town of Klevan in Rivne region. The 5-kilometre green corridor, created by trees lined up in an arch of perfect round shape, and the railway between became the main tourist attraction of Volyn, is the object of constant pilgrimage for couples in love and travellers. You can go for a walk to the tunnel at any time of year, but it is better in summer or autumn, when nature paints the leaves in incredible colours and shades, from green to gold and crimson. In the tunnel, lights and shadows play in a peculiar way and photographers adore this place.

The easiest way to visit Tunnel of Love is on our tours: 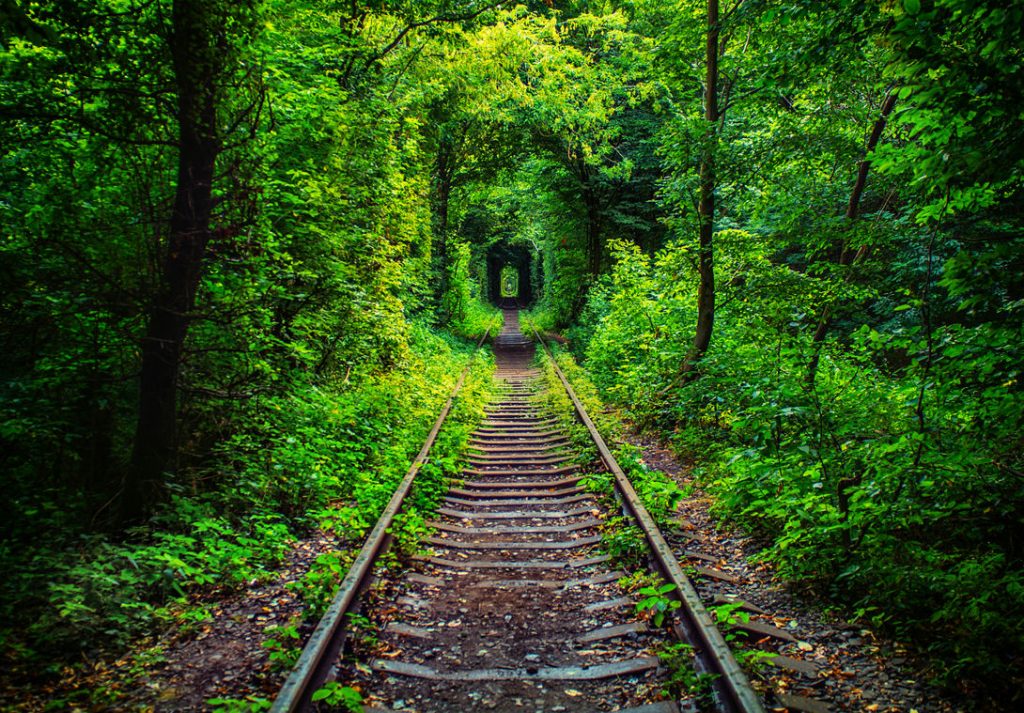 What is the history of the Tunnel?

The wold discovered the Tunnel of Love about 10 years ago thanks to the tourists who were wandering in the bushes on the outskirts of Klevan and suddenly found themselves on a railway track hidden among trees. The photo they took was shared on Facebook and immediately received a lot of distrustful comments suspecting the use of Photoshop. But the first travellers who went there to see the beauty with their own eyes dispelled these doubts. 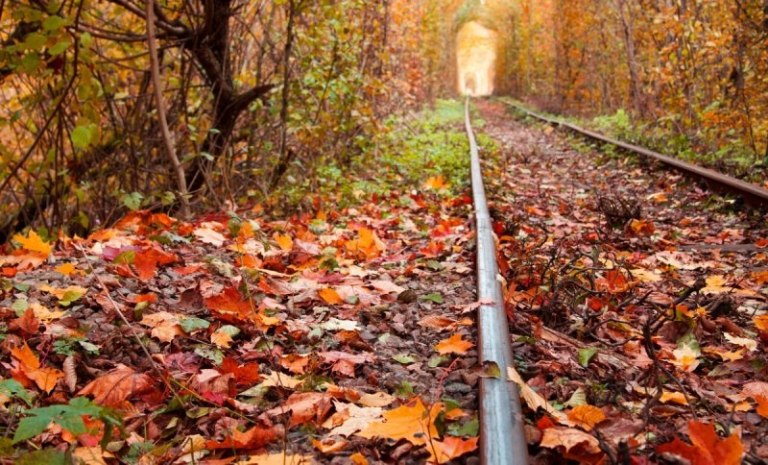 There are many interesting legends about the tunnel. According to one of them, this green corridor existed for several centuries, and once became a refuge for a couple of young people in love – fugitives from Klevan Castle. Another version is even more interesting, telling about a young Polish engineer who fell in love with a girl from Klevan and built a railway directly across the forest to shorten the road from Orzhev, where he lived, to his beloved woman. Eventually, they went different ways, and locals say that these people carried love throughout their lives. An incredible story!

But a more prosaic version shows that the railway was built during the Soviet era for military purposes and for greater secrecy it was disguised by planted trees. With time, the military left and nature was left alone. Since then, nature transformed the tunnel into a real miracle, a  unique arched structure. And when a freight train from the woodworking plant in Orzhev began to run on the track every day and hit the branches of trees and bushes, its shape became perfect. 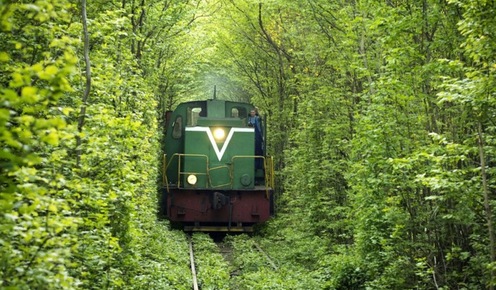 A place for lovebirds

The green tunnel has a romantic story behind it. But that’s not all: this location has an unusual aura, the atmosphere of a place where dreams come true and hearts unite. This aura is expressed with a green arch, and the two rails stand for the paths of two lives. There are a number of beliefs about the tunnel and its peculiarities. Couples believe that a kiss in the tunnel will strengthen their love for life, and if they stand on the rails and hug, they will never part. The tunnel is popular with newlyweds, they love to hold wedding photoshoots here and even plant flowers that symbolize tender and passionate feelings. Locals say that visiting the tunnel is a good sign for anyone and advise visiting it a couple of times per year! 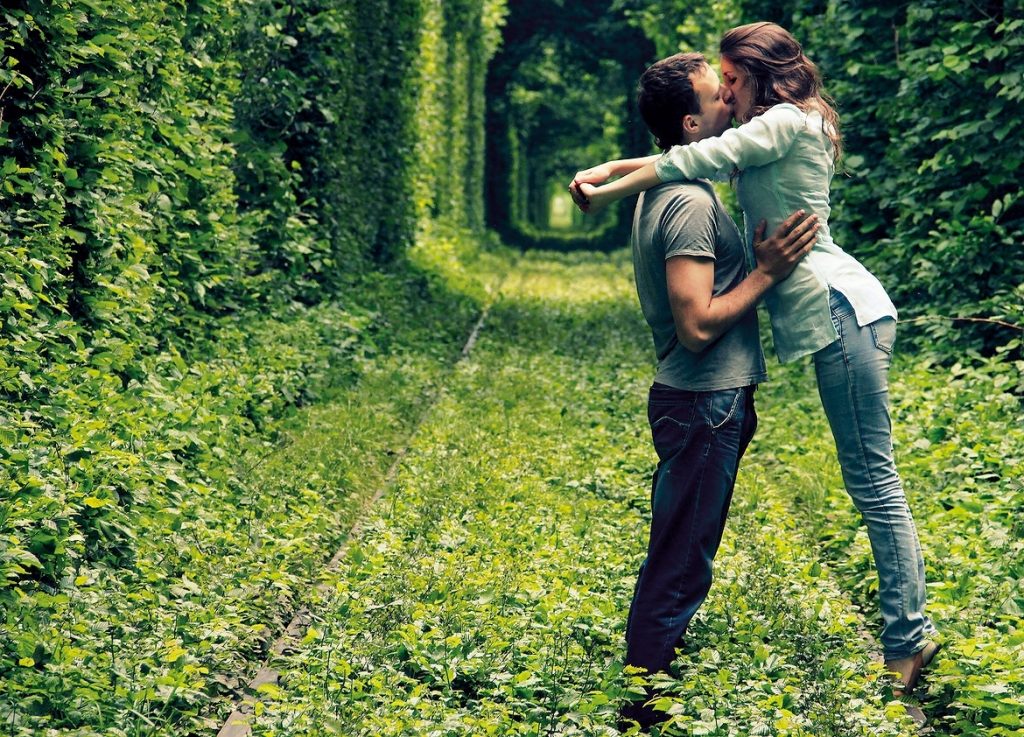 Interesting facts about the Tunnel of Love

1. The tunnel can be seen in commercials of famous brands. In 2012, the Japanese company Fujifilm shot a 40-second video, the characters of which suddenly fall from a solid green wall into a tunnel and quickly capture various miracles with a brand new camera. 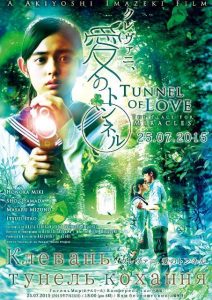 2. A few years ago, Japanese director Akiyoshi Imazaki filmed a movie in the tunnel. The place for the shooting was found by accident, through a link on the Internet. Imazaki was so fascinated by the beauty of the tunnel that he not only brought a film crew to Ukraine and shot a wonderful lyrical drama but also renamed the film as “Klevan- Tunnel of Love”. The main role in the movie dedicated to the hardships of a young couple was played by the favourite of the Japanese audience, 17-year-old model and actress Miki Honoka. The film premiered in November 2015 at the Hanoi International Film Festival. Thus, the whole world learned about the beauty of Ukrainian nature.

3. On May 20, 2017, in China, near the city of Hefei (Anhui Province), was opened a romantic place called “Tunnel of Love”. The opening ceremony was attended by representatives of Ukraine. This tunnel is similar to the Ukrainian Tunnel of Love, although much smaller in size.

4. The tunnel in Klevan periodically appears in the top lists of the most amazing railways on the planet.

What else to see in Klevan except for the Tunnel of Love?

Those who are interested in Ukrainian history will enjoy seeing the high and strong walls of Klevan Castle (1475). The castle, which belonged to the Czartoryski family, is currently in need of restoration. The best-preserved is the four-span arch bridge on powerful supports located over the moat. Near the castle, there is a beautiful church of the Nativity of Christ (1777), and across the road – the Church of the Annunciation with a bell tower (1630). There is a two-tiered bell tower near the church.

If you want to feel what true romance is, beyond space and time, then it’s time to visit the Tunnel of Love. You can do it within our tours: