Narrow streets, ancient cobblestones, provincial quietness… The small medieval town of Zolochiv welcomes tourists. Throughout history, the town has seen times of incredible economic prosperity and ruin, the luxury of royal receptions, and the unbearable pain of human suffering.

The town’s landmark is the noble Zolochiv Castle, a museum reserve of the Lviv Art Gallery, included in the tourist route “Golden Horseshoe of Lviv Region“.

Historical and architectural monument of the 17th century of national importance was revived from oblivion by the incredible efforts of art historian Borys Voznytsky, who devoted his whole life to the preservation of Ukrainian cultural heritage. The reconstructed Zolochiv Castle Complex impresses with its contrast of lyrical beauty (Chinese Palace alone is quite impressive) and the drama of events that its silent walls preserve in their memory. 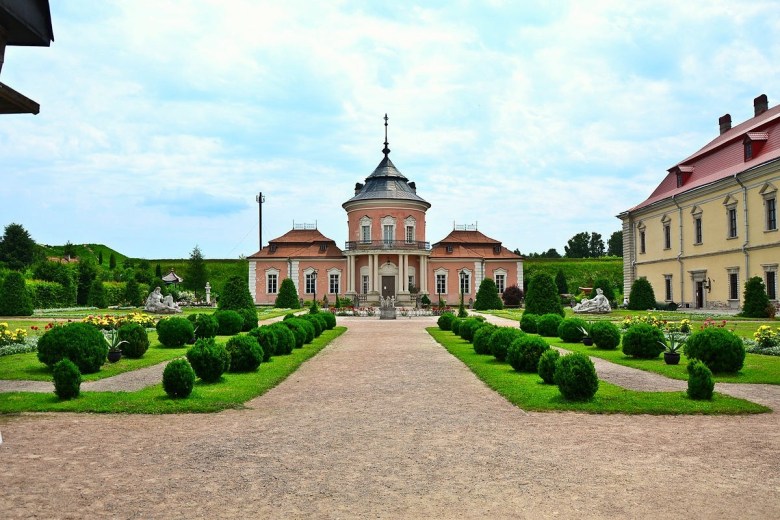 After passing the drawbridge over the once deep moat and crossing the forged iron castle gate, you stand dumb in delight seeing a miniature garden with bosquets and flower beds, manicured lawns, exotic magnolias, Baroque sculptures, and an exquisite fountain.

Today, the castle hospitably receives hundreds of thousands of tourists and opens to them the veil of its rich history, shrouded in the romance of the past, mystical legends, and tragic mysteries. From the depths of the castle’s past echo the sounds of loud marches and gala polonaises, the carefree laughter of the European nobility and the dreamy whispers of the royal couple, the volleys of cannons and the moans of political prisoners.

Zolochiv Castle begins the countdown of its stellar history as a family nest of the Polish magnate Sobieski family in the early 17th century when a stone fortress of defensive character was built on the site of the former wooden fortification. Hidden behind a high rampart with bastions and a ravelin, the Renaissance two-story castle withstood several unsuccessful Tatar attacks and was even occupied and mutilated by the Turkish army in 1672. The castle however was quickly revived thanks to the future King of Poland John Sobieski.

Later, under the influence of contemporary oriental fashion, Queen Maria Casimire initiated the construction of an elegant Chinese palace – a rotunda, today resembling a pink and white festive cake with an elegant colonnade, balcony openwork, a delicate spire. Combining the functions of a powerful military fortress and a cozy, comfortably equipped royal residence (many sources mention high-tech heating and sewerage systems), the castle was experiencing its best times. One can only imagine what a tumultuous aristocratic life raged in the castle walls in those bohemian cloudless years. 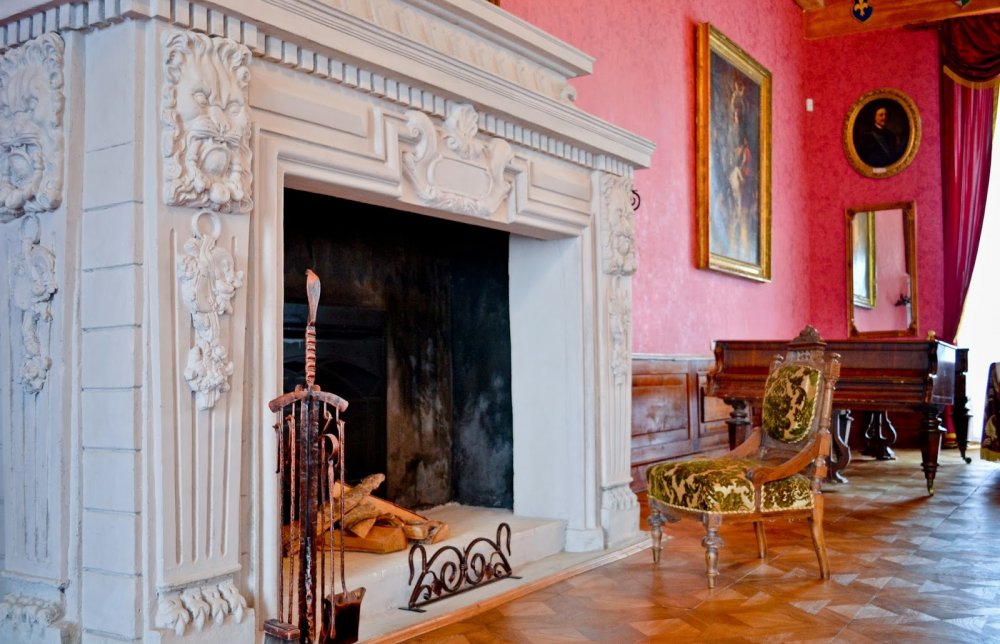 The extinction of the Sobieski family and the repeated change of owners of the castle led to its decline. In the early 19th century, the castle’s aristocratic past reached its end when the Austrian government installed here a military camp. But the worst times were still ahead.

At the end of the 19th century. the former royal residence becomes an Austrian state prison. For almost 80 years, the dying and practically destroyed castle played the sinister role of a warden, and thousands of people were deprived here not only of freedom but also of life.

The most dramatic page in the history of the castle was 1939-1941 – at that time the building served as an NKVD prison of the Soviet Union. Eyewitness accounts of the inhumane crimes of the Soviet system are frightening, but it is even more terrifying that the spiral of history is relentless. A monument-chapel was erected in 1995 in memory of the political prisoners tortured in the castle basements of the Zolochiv fortress.

In the post-war years, the castle housed a vocational school. Only in the early 1970s with the transfer of the complex to the Lviv Art Gallery began the revival of the historical and architectural monument. Large-scale reconstruction of the castle required a lot of time and significant financial investment, however, Borys Voznytsky saw no obstacles in the noble taks of bringing back to life the pearls of Ukrainian architectural and artistic heritage. 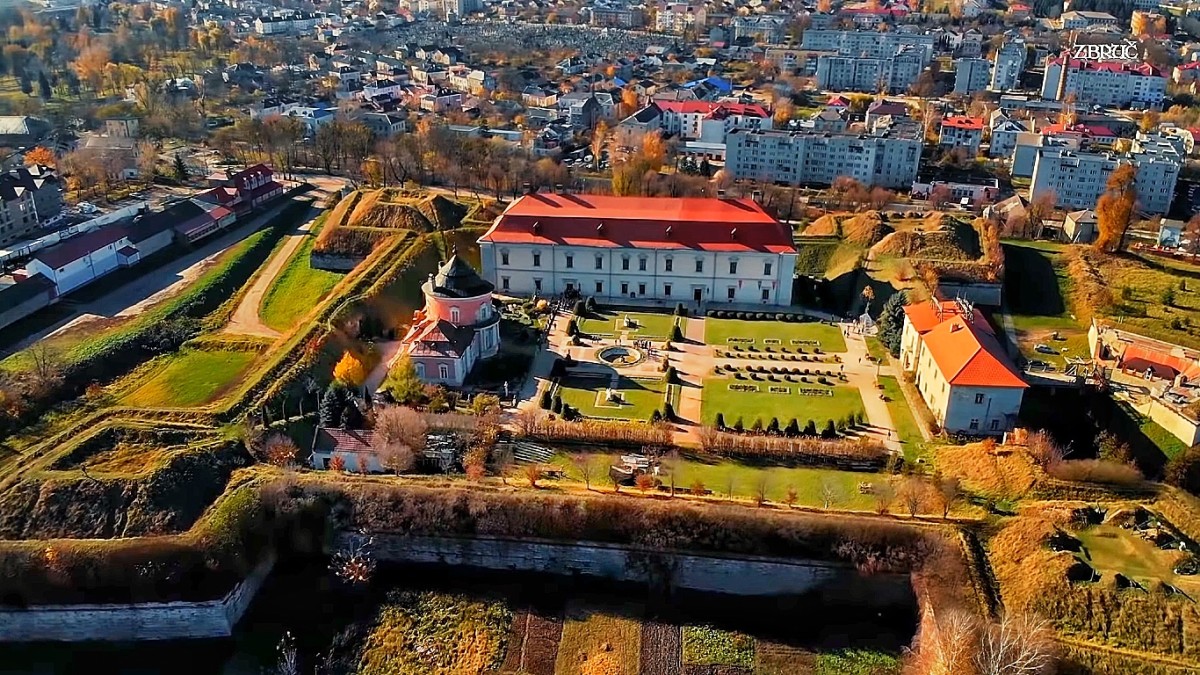 The castle complex currently consists of the Royal (Great) and Chinese palaces, a two-story gatehouse, and fortifications. The interior of the Grand Palace has hardly survived, unlike heating and drainage systems.

Today, an exposition from the funds of the Lviv Art Gallery is located in the castle that was opened for tourist visits in 2009. Here you can get acquainted with interesting samples of stylized interior items of the 17-18th centuries, picturesque copies of works by leading European artists, regalia of knightly orders, an interesting collection of hunting trophies. The Chinese Palace showcases the art of the East – Ancient Egypt, Japan, China, India, Indonesia, and more.

How to get to Zolochiv castle?

Zolochiv Castle is part of the ‘Golden Horseshoe of Lviv Region’ (castles of Lviv region), so the way to the castle is a popular tourist route and can you can choose among several public transport modes to get there. 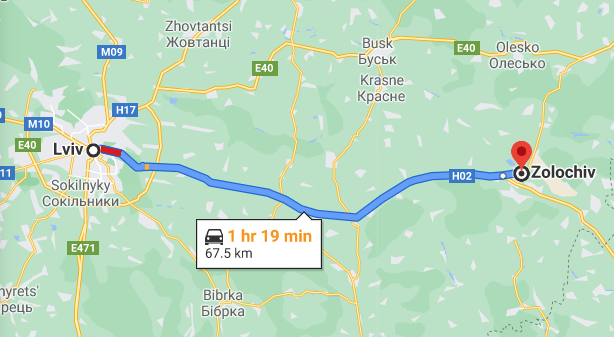 If you like to travel with a small group, you can go there in your own car or public transport, which runs quite often. But if you prefer tourist excursions you can get an interesting team, a lot of useful information and the opportunity to see other castles of the Golden Horseshoe: Pidhirtsi Castle, Olesky Castle, Svirzh Castle.

You can get acquainted with the history of Zolochiv castle on our tour 4 Castles near Lviv tour.